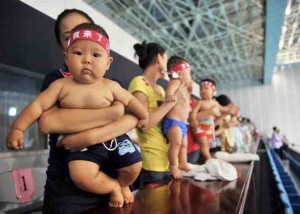 Articles on China’s rise typically focus on either their booming economy, energy needs, or environmental challenges. But underlying all these is a serious but underappreciated looming crisis: China’s unprecedented population changes.

In the not-too-distant future, these changes will start having a growing impact on China’s economic and social dynamics….and could potentially derail China’s plans become the world’s next superpower.

In a January 24, 2011 interview with Charlie Rose, George Shultz (former U.S. Secretary of State, 1982-1989) was asked: “The debate in the country today, what ought to be the conversation from the leadership?  From academia, from the private sector, from the government?”

Shultz replied: “I think that there are these big influences that we have to pay attention to. Number one: comparative demography. The changes taking places in the age structure of the different countries around the world are stunning– big time. (They’re) going to make a big difference, including China, which I mentioned earlier.”

Earlier, Rose had asked him: “What is it that we need to understand about China?”.

His reply: “We need to know something that doesn’t get very much publicity. And that is the implications of the demography of China. They have ahead of them the most dramatic changes of their age structure of any major country. And they’re going to bring about huge changes that they’re going to have to cope with…”

The reasons for these demographic changes are complex and inter-related, however the One Child Policy is a key culprit. Only three decades ago, China was worried about having too many children to support. But in the coming decades they’ll be facing the opposite problem: as a result of the policy, China will have too few children to support a rapidly aging population.

“The major policymakers are only concerned about the total number of the population,” according to Peng Xizhe, dean of social development and public policy at Fudan University. “But now China’s population dynamic has become so complicated. On the one hand, the number is still growing. Then we have the very rapidly aging population. Then we have the issues of big migration. And also we face the problem of the abnormal sex ratio at birth.”

According his 2010 Brookings Institute report on China’s looming population crisis, director Feng Wang tells us that a single number speaks volumes: 160 million. Today, there are about 160m migrant workers in China. There are also about 160m Chinese people who are 60 years old or older. Thirdly, there are more than 160m Chinese families with only one child.

The scary part for China? The relative sizes of these three populations are moving in the wrong directions.

1) The era of cheap, young Chinese labor is over

What this means of course, is that there will soon be a sustained decline in new entrants into the labor force. Over the past three decades, political legitimacy in China has been built on fast economic growth, which has been powered by a seemingly inexhaustible supply of cheap, young labor.

A victim of their own success? China has achieved in 50 years what it took most European countries a century to accomplish: Increasing life expectancy from the 40s to over 70. As a result, China’s 60+ population will increase dramatically – from 200 million in 2015 to over 300 million by 2030.

One huge future challenge: How to meet the rising demand for health care services and retirement benefits?

With a virtually non-existent government pension and social welfare systems, Chinese leaders will likely need to reprioritize and shift resources away from investment and production in the coming decades.  (Caixin, a Beijing newspaper, recently reported that there’s already a severe shortage of nursing services and elderly residential facilities in Beijing).

Today, China’s 65+ population is only around 8%, which is a lot lower than that of the US, Germany, or Japan (around 20% for all three). But they’ll catch up in about 30 years, when they may face the same problems that have led to Japan’s current economic stagnation: a declining labor supply, aging population, and increased public spending obligations. 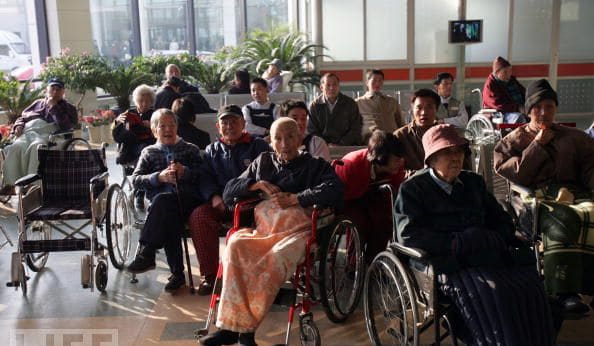 Making matters worse, China’s elderly population won’t be able to rely on the traditional Chinese retirement plan: Having many children to look after them in their old age. 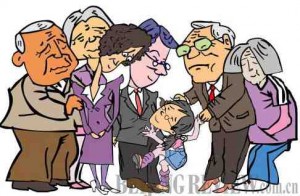 Again, blame it on the One Child Policy, which has resulted in the so-called “4-2-1” phenomenon (the one child grows up to support two parents and four grandparents).

In addition to this problem, the gender imbalance and ratio of females in the labor force is also likely to create additional challenges for a society which traditionally has left elder care to its women (especially daughters-in-law).

“China’s slow recognition and inaction in the face of its impending demographic crisis….reflect policy makers’ lack of understanding of the changing demographic reality. Inertia also results from the resistance of the country’s birth-control bureaucracy, which formally employs half a million people….The looming demographic crisis will largely define China in the twenty-first century. Given that demographic changes take time to develop, and that their ramifications are not only massive but also long-lasting, China’s inaction has already proved costly—and will only grow more so the longer it persists.”