1870s:A newly modernized Japan—which has been quicker in adapting to the West—starts flexing its new muscles in Taiwan and Korea, which had long been one of China’s tributary states.

Another humiliating rout for the Chinese. The superior Japanese military kicks Chinese ass on land and sea—the war is over in a matter of months. The loss has strong repercussions—arousing heated nationalistic feelings within China. 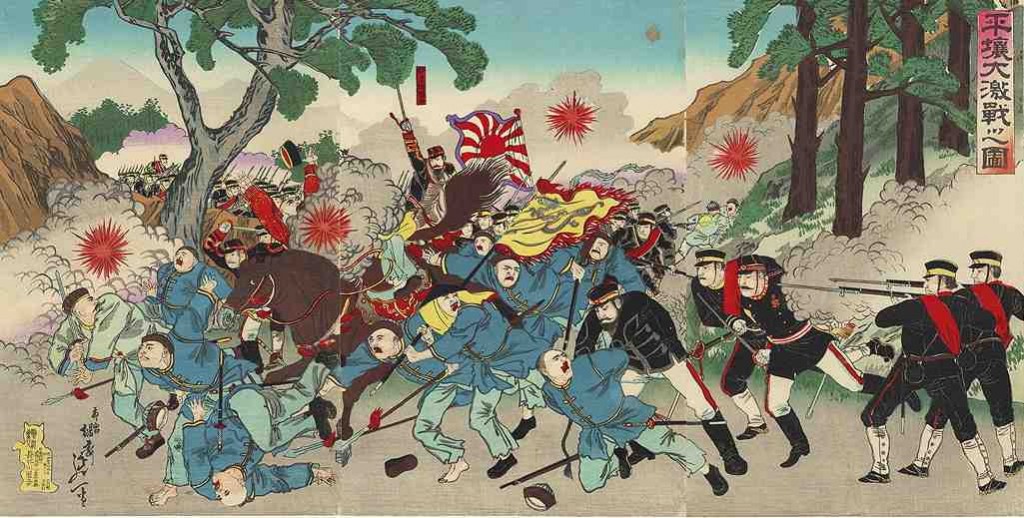 It was one thing to lose to outside Western powers. But another thing to lose to a former tributary state—one that has long been looked down on by the Chinese (who had long referred to the Japanese as “dwarf pirates”). The defeat sparks deep questions about very basis of China’s traditional ideology.

The war ends with the Treaty of Shimonoseki, which, ceded Taiwan to Japan as well as gave Korea its independence.

“CARVING UP THE CHINESE MELON”

As the Qing falls into deeper decline, European powers take advantage by wringing further concessions. In 1897, after two German catholic missionaries are killed in western Shandong, Germany seizes Qingdao (in Shandong province) and forces China to grant them a lease for 99 years. 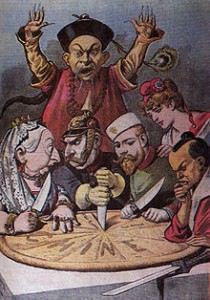 Other countries pile in and declare greater “spheres of influence”— including the Russians, the French (99 year lease on Guangzhou Bay), the British (99 lease on New Territories next to Hong Kong), and even the Italians. Only the Americans stayed out of scramble. If not for the tensions and rivalry between European powers, China would likely have been completely carved up.

1898: The loss to Japan showed that China’s self-strengthening still had a way to go. The Hundred Days’ Reform speeds up modernization—which includes an overhaul of the education system, as well as a westernized military. 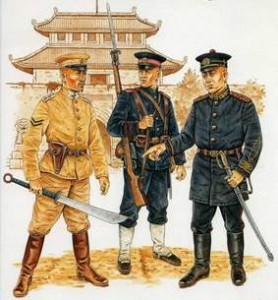 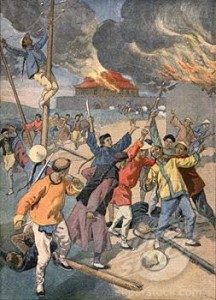 Around this same time, the Boxer Rebellion breaks out —a powerful grass-roots to “expel the barbarians”. The uprising was a defining moment that would climatically be the dynasty’s last major event—combining the dominant 19th century themes of internal rebellion and foreign influence.

The movement started out as an effort to rid China of Christian missionaries, who were annoyingly aggressive in winning converts (often disparaging ancient worship practices). Rumors of foreign witchcraft didn’t help reputation of the foreign devils whose tall churches “block the sky.” Floods and droughts became attributed to their meddling. Later, the movement grew to become more generally anti-Western.

During the last decades of the late Qing, the Dowager Empress Cixi was the real (but un-official) power who ruled from “behind the curtain”. Powerful but clueless, she is blamed for a number of bad moves. Her most famous blunder—symbolizing the stupidity and corruption of power— was her command to divert funds earmarked for modernizing China’s navy on the lavish renovation of Beijing’s Summer Palace and the Marble Boat.

The Empress—who was impressed with Boxer claims that their supernatural practices made them invulnerable to foreign weapons— supports their rebellion and declares war on all eight Western powers.

In 1900, rebels attack railway and telegraph lines and hold foreign legations in Beijing under siege. The gamble fails miserably. Led by British troops, the eight-nation army crushes the movement. The empress’ court flees to Xi’an disguised as peasants. 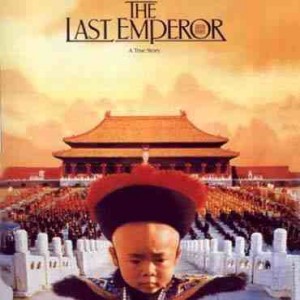 The Qing is forced to sign the Boxer Protocol and pay huge indemnities (US$333 million), tying up revenue for decades.  A year later, Cixi returns to Beijing, where she remained until her death in 1908. She was succeeded by her two-year old grandnephew, Puyi (inspiring the 1987 movie The Last Emperor).

1905: Russo–Japanese War—Japan stuns the world by defeating the Russians in Manchuria.

Led by Sun Yat-sen (a Western-trained medical doctor), the Republican movement realized that if China was going to turn things around in the new world order, political reform was necessary. He organizes his government in Nanjing, with favorable support from Britain and France.

Taking advantage of confusion after 1911, Tibet and Outer Mongolia declare their independence.


1912: The Qing dynasty finally ends with a series of loosely connected uprisings and mutiny by imperial troops. The boy-emperor Puyi abdicates. China’s imperial system is over and the Republic of China is born.

NEXT: The Republic of China >>